The Vibe Collective : Real Talk. Real Music. Real Vibes. Each and every Saturday 3pm to 5pm on CIUT 89.5FM with DJ Jams, Jamaias DaCosta, Mali DocuVixen, Kemba King, Victoria Grant, and Adrian Worrell aka. DJ gryphen. THE VIBE COLLECTIVE IS AN ONGOING DIALOGUE ABOUT HIPHOP, ART, DECOLONIZATION, SOCIAL JUSTICE, IDENTITY, CAPITALISM, ENVIRONMENTAL JUSTICE AND THE WAYS IN WHICH THESE THINGS INTERSECT, FOLLOWED BY AN HOUR OF MUSIC TO MOVE YOU. www.ciut.fm

The Collective Speaks with Daltin Higgins a writer and a long time music event organizer in the city, speaks about Rap N’ Roll – The Afro Alternative Music Showcase, on Thursday February 27th. Facebook Link: Click Also in studio is Kevin Edmonds part of Toronto Haiti Action Committee which is an organization of Toronto-area activists who feel that Canada’s policy toward Haiti should emphasize democracy, respect for Haiti’s sovereignty and self-determination, solidarity and international accountability. Speaks about upcoming Event: Facebook Link- Click 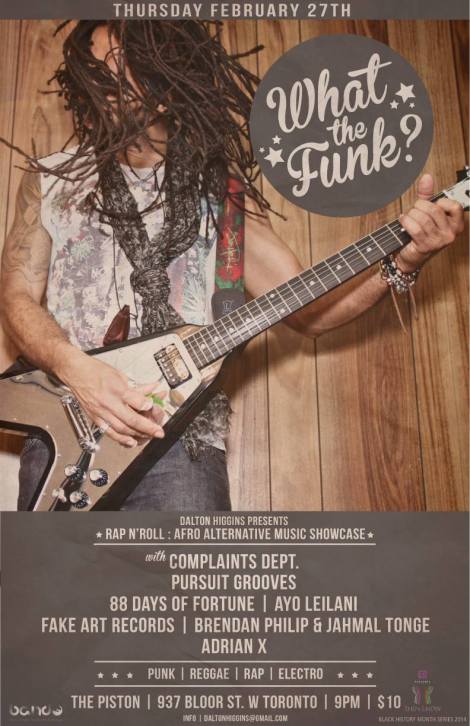 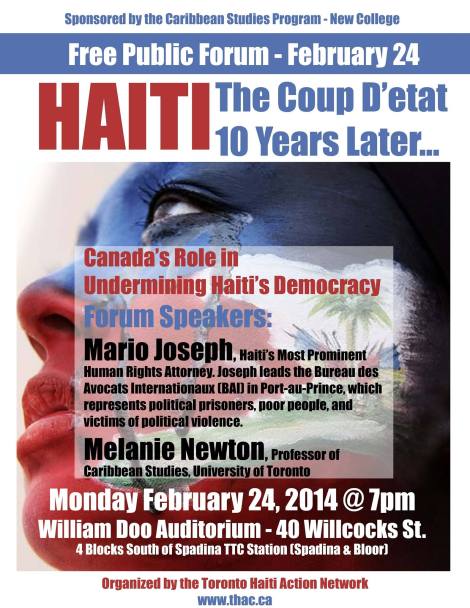 The Toronto Haiti Action Committee presents HAITI: THE COUP D’ETAT 10 YEARS LATER..
Monday, February 24, 2014 7:00pm until 9:30pm
REE PUBLIC EDUCATION FORUM ON HAITI AND ITS PEOPLE’S STRUGGLE FOR JUSTICE AND EMANCIPATIONCanada was a party to the 2004 coup in Haiti against the democratically elected government of President Jean-Bertrand Aristide. Many of us are not aware of this assault on the self-determination of the Haitian people.”On Jan. 31 and Feb. 1, 2003, Jean Chrétien’s Liberal government organized the “Ottawa Initiative on Haiti” to discuss that country’s future. No Haitian officials were invited to this assembly where high-level US, Canadian and French officials decided that Haiti’s elected president “must go”, the dreaded army should be recreated and that the country would be put under a Kosovo-like UN trusteeship.” – Yves Engler, writer, journalist and international solidarity activistFEATURED SPEAKERS

Joseph was the lead lawyer for the victims in the prosecution of the BAI’s most successful case, the Raboteau Massacre trial. The trial was described by a United Nations expert as “the longest and most complex” in the history of the Haitian judicial system.

In 2012, Joseph and IJDH Director Brian Concannon filed suit against the United Nations on behalf of victims of the 2010–2011 Haiti cholera outbreak, allegedly introduced to Haiti by UN troops in October 2010.

DR. MELANIE NEWTON, received her doctorate in Modern History from Oxford University in 2001 and is a professor at the University of Toronto. She specializes in the social and cultural history of the Caribbean and the history of slavery, gender and emancipation in the Atlantic World.

Recent publications include the preface to Jerome S. Handler, The Unappropriated People: Freedmen in the Slave Society of Barbados (University of the West Indies Press, 2009 [1974]); The Children of Africa in the Colonies: Free People of Color in Barbados in the Age of Emancipation (Baton Louisiana State University Press, 2008); and “The Road Through Africa: Imperial Nationalism and Diasporic Racial Consciousness in Postslavery Barbados,” in John Chalcraft and Yaseen Nourani (eds.), “Counterhegemony in the Colony and Postcolony” (Palgrave, 2007), pp. 115-137. Her current research project is entitled “This Island’s Mine: Indigeneity in the Caribbean Atlantic World.”

In 2004, an Afrikan student group associated with the University of Toronto started studying the history of the Haitian Revolution — Haiti was about to celebrate the 200th anniversary of its independence and this struck the students as an important and meaningful event to commemorate. It was almost-coincidence, therefore, that their eyes were on Haiti when the 2004 coup against President Aristide took place. This event politicized these students and lead to the formation of the Toronto Haiti Action Committee. Although many faces have changed in the group since 2004 the goal of the group remained, for many years, to raise awareness about Canada’s role in the coup, to correct the official narrative about the coup, and to prevent this sinister event in Canada’s history from being swept under the rug.

Like our sister organization, CHAN, our work has taken on a new emphasis since the devastating 2010 earthquake. Today, the same powers that sought to effect political change in Haiti through the 2004 coup are now controlling the rebuilding of Haiti. The key question that Canadians need to ask is this: in whose interests is Haiti being rebuilt? The interests of the poor majority? Or the interests of international financiers and sweatshop owners?

* For massive earthquake relief and aid, delivered in a manner that assists and strengthens the sovereign and popular institutions of the Haitian people

* A full Parliamentary inquiry in Canada concerning its role in the overthrow of elected government in Haiti in 2004, and reparations to the Haitian people from all the countries that took part in that illegal act